All, or at least a lot, of the best Pittsburgh concerts and comedy for May 2022

Japanese Breakfast / May 5 / The Roxian

Michelle Zauner’s new JB album, Jubilee, was Slant, Yahoo, and AV Club’s “album of the year” last year. It’s full of luscious pop songs washed with synths, horns and strings, and builds you up and breaks you down in equal measure.

Kick out the jams with Detroit’s original anti-establishment, fuzzed-out proto-punks, MC5, or at least their frontman, Wayne Kramer, whose on a 8-date national tour. The show, featuring openers Murder for Girls, is presented by Pittsburgh’s Get Hip Records.

The Toronto-born, Austin-based rock duo play Pittsburgh for the first time. The pair are up for their first two Juno awards this year – basically, the Canadian Grammy’s – including best rock album. Recommended for those who like their keys black and their stripes white.

Chino + co still crush some 30 years later. Latest album, Ohms, is some of Deftones heaviest stuff yet.  Backing them are French metal juggernauts, Gojira, who crush with equal ferocity. They rage against environmental devastation in songs like “Toxic Plastic Ocean” and “Amazonia”; proceeds from their latest album, Fortitude, go toward APIB – The Brazil’s Indigenous People Articulation.

Victor Wooten and Bass Extremes  / May 12 / The Thunderbird

The bass, as noted bass player William Murderface once declared, is the foundation of the band. So what happens when your band is a trio built around a drum and two bass? It gets extreme. Victor Wooten, founding member of Béla Fleck and the Flecktones, is one of the greatest to ever do it. He and fellow bassist Steve Bailey first performed together in 1992. Gregg Bissonette performs drums.

Brooklyn post-punks, Savak, meet Pittsburgh post-punk Sub Pop signees Gotobeds, at one of Pittsburgh’s independent record stores for an in-house performance. Don’t miss Upper Wilds, also from Brooklyn who could up and steal the show.

A well-placed source (and common sense) tells the Independent it’s 99% likely that Pittsburgh’s Benji., part of the Spillage Village crew – hip-hop’s hottest new collective, says XXL — will make an appearance. Based in Atlanta (with Baltimore ties), the Spillage collective includes JID, 6lack, and others including the evening’s headliners, Earthgang: Olu and WowGr8

Now in it’s fifth year, 300 local bands play 28 stages, for free, in Millvale, all day long. Not to mention some 30 comedians and nearly 50 artists. Where else would you go?

One of the best jazz guitarists and best jazz drummers, together.

Keep on eye on Pittsburgh’s Sewerheads, made up of members of Rave Ami, Gotobeds and Empty Beings. They were on a bill at Government Center last month that may have been their first gig, and they’ve already got a spot on a show lined up at Baby’s All Right in Brooklyn. Not bad for a band with just a few demos. There’s plenty more guitar noise spread throughout this gnarly bill.

Legendary hip-hop MCs descend on Pittsburgh for an afternoon benefit concert for the Citizen Science Lab. Rakim is internationally known, and simply one of the greatest MCs to ever do it. Slick Rick’s great adventure was once upon a time back in 1988. DJ Jazzy Jeff and Big Daddy Kane are on the bill as well. This is an afternoon performance.

SOLD OUT: King Gizzard and the Lizard Wizard, May 22, Mr. Smalls.

Marc Maron: This May Be The Last Time! Tour / May 12 / Carnegie Library Homestead

What was once a Kevin Sousa dive bar has been resurrected into a comedy club. This is the grand opening performance.

Knights of the Arcade / May 20 / Arcade Comedy Theater

Nerd out at this monthly improvisational adventure show, inspired by Dungeons & Dragons.

Byrne, who grew up in Western PA, co-created the Pittsburgh-based sitcom, Sullivan & Son. 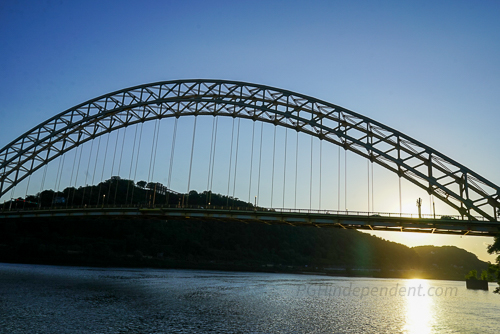 Frack ban showdown set. County Exec. Rich Fitzgerald, ever the wily statesman, waited until moments after county council adjourned Tuesday to present his backdated veto on a fracking ban in county parks, which passed 11-4 last week. If the “yes” votes hold with 10 or more, council can overturn Fitz’s veto during special session Tuesday.

The frack did he say? There’s more! Ryan Deto reports that Fitzgerald defended his veto at a press conference Wednesday, before defending the honor of fracking companies:  “These companies all get painted with broad brush. If we did that around things like gender or ethnicity or sexual orientation or race, that’s not the way we do things.”

Greene County frac-out: Meanwhile, Reid Frazier reports on a June “frac-out” at an abandoned well near New Freeport. The article reports EQT confirmed that “fluid from the active fracking site was ‘communicating’ with the abandoned well.” Said one local resident about the possibly contaminated water: “It’s terrible… they tested the water, but we haven’t got results back.”

What killed equity in Pine-Richland?  For PINJ, The Incline’s Colin Williams dives into a years-long saga at the well-to-do school district, involving a “newly-elected conservative school board majority and the nixing of a policy meant to improve diversity and inclusion efforts in the district.”

Lucky’s survives. The longtime Strip District gay bar that defied the odds was also profiled by the City Paper during Pride Month.

Doug Shields returns. The former city council president announced Tuesday his intent to run for his old District 5 council seat, vacated by Corey O’Conner, who was appointed Allegheny County Controller last week. Barb Warwick, a Four Mile Run resident and community activist, announced her candidacy for the vacant seat at a kickoff event last month. The race is on November’s ballot, and more might yet declare.

Right-to-Know law changes?  The PG reports on two bills in the state legislature that would significantly impact the state’s open records law. One would allow the Office of Open Records to deem a person a “vexatious requester,” while another, introduced by state Sen. Doug Mastriano, “would bring the PIAA, state-related universities and economic development organizations under the scope of the RTK law,” as well as 911 call and police blotter information.

PA has a new child care tax credit. Kate Huangpu also reports a one-time boost in the state’s property tax / rent rebate program, and who is eligible for either.

“stuff you can do this weekend”

Newsguild fights another day: An administrative law judge from...

Modern-day company town. UPMC has monopoly power and is...